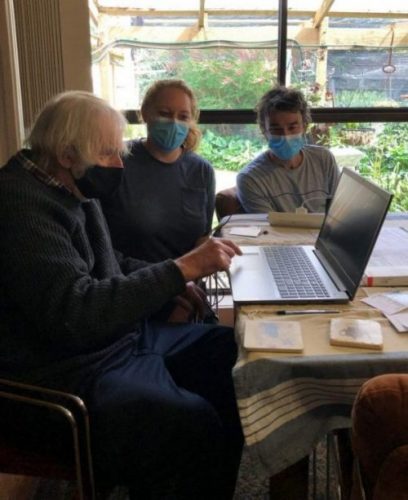 Ruffy and the Gardeners

I had the pleasure of interviewing one of our Melbourne clients Peter, and gardeners Ella and Brendan, and I have to say, the story is so inspiring.
Peter has lived such a fascinating life. I could have talked to him for hours, but alas, I had to actually write this piece.

Where to begin with the story of Peter or “Ruffy” as he is better known, and how Ella and Brendan have changed his life?

Where did that nickname come from? Is it that he’s a bit rough around the edges, his sense of humour being unique and not to everyone’s tastes, or that he is a handyman by trade?
None of the above, in fact he inherited the name. How do you inherit a nickname you ask…? Well Peter had a Jack Russell named “Ruff” and Peter always said he was “Ready” when the office ladies asked how “Ruff” was. When his dog passed after 18 wonderful years, the nickname was shortened, and Peter became known as “Ruffy”.

Ruffy has learnt to live with Parkinson’s since he was diagnosed, and even though he now finds it difficult to work on old cars and build model aeroplanes, he has not let it get his spirits down… he is still as active as he can be, and his mind and wit are very much still there.

He has never been a good cook (his words!), so when his wife, Maria, had a stint in hospital last year his daughter decided that he needed some help.
Before this Ruffy was all ready to sign up to live in an aged care facility – the things that were holding him back were that he wouldn’t be living in his own home with his wife, and he would only have one room to put all his possessions in. He did not like this idea as he has collected a myriad of items over the years.
His daughter ended up ringing My Aged Care to see what other options there were. They were able to organise a HomeCare Package (HCP) with BallyCara as the Service Provider.

This is where Ella and Brendan come in. You didn’t think I forgot about them, did you? 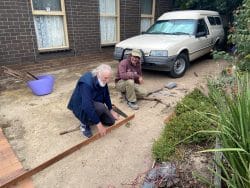 They are gardeners who met Peter about 12 months ago when BallyCara contacted them to help maintain the garden through his HCP.
Ella and Brendan have nothing but kind words to say about Peter and Maria. They both enjoy Ruffy’s sense of humour and get along well; though it is Brendan and Ruffy who get along like a house on fire as Brendan is a handyman and tinkerer himself. They have formed a father-son like relationship over the past 12 months. Ruffy has even given Brendan his old audio equipment as it was collecting dust. Brendan has been able to share some of this equipment with his friends, making him a true recycler, just like Ruffy.

Ella and Maria enjoy chatting over a cuppa; they are thoroughly looking forward to being able to engage in this interaction again, as Covid has prevented this.

Ella and Brendan visit fortnightly on a Tuesday for 2-3 hours per visit. On these days Ruffy is up at 7am waiting for them. He has developed this routine and is appreciative of all the work they do to support him staying in his own home with his wife.

Peter is completely self-sufficient when it comes to technology now, thanks to BallyCara, and some extra help from Ella and Brendan. BallyCara helped him purchase a new computer (through his HCP) to keep in touch with family, friends, and the various clubs and associations he is part of (Car Club, Historical Society, Model Aeroplane Club, and Men’s Shed just to mention a few). He is on Facebook and knows how to Zoom and Facetime. Ella & Brendan helped set everything up and sync it to his mobile. He also bought a printer to complete his setup.
During lockdown (of which Melbourne endured the toughest and longest lockdown in the world), Ruffy & Maria weren’t even able to see their children and grandchildren who lived only 7 kilometres away, but that was 2 kilometres outside of the allowed radius. It has been so beneficial for them to still be able to communicate utilising this new technology. 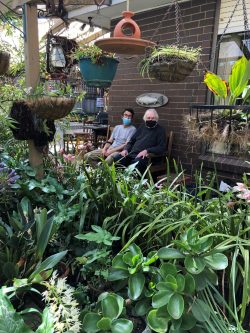 Ella and Brendan are enjoying their time with Ruffy and other clients, so much so that they have both become full time gardeners due to BallyCara being able to contract out to them. They consider themselves more holistic gardeners and home carer’s as they feel they have been very lucky to have met and formed such wonderful relationships with clients like Ruffy.
They have seen how he has improved considerably since their first meeting. He does have his bad days but the good far outweigh the bad; and they encourage him even when he is having an off day, which he appreciates.

Ruffy cannot condense down to one line just how grateful he is for Brendan and Ella. They have filled a void in his life and truly changed it for the better. He is genuinely happy having this association and is given great pleasure having things he is now unable to do himself looked after by them.

Peter thinks it is fantastic the government has a scheme for keeping older Australians in their own homes for longer. He is glad he decided to stay put for now, because otherwise he never would have met the gardeners who have changed his life. He is looking forward to the next couple of years and the milestone of 80 years young!

See… inspiring! And I didn’t even have time to touch on Ruffy’s life achievements, his childhood, or the places he has travelled.
It is amazing how two people can make such a difference in someone’s life!