The extraordinarily talented Nan has always been interested in art. Her pieces have clearly been produced out of passion and (for the landscapes) a love of the places!

She grew up in Western Brisbane during the war years and even from this early age was constantly drawing and painting. In fact, her first career idea was to become an illustrator for children’s books. Whilst this did not happen, she has had a wonderful life filled with many artistic opportunities. Her first employment was as a teacher at Cavendish Road State High School where she also had a hand in writing the art syllabus (this was before standardised syllabuses).

Nan began her artistic endeavours in pottery. She continued this past time (which eventuated into an income) for 15 years before moving into other mediums. She received a Certificate in Studio Ceramics from the then Toowoomba Technical College in 1972 and built a studio and kilns at her Gatton home.

Nan took up painting full time in 1996 when she moved to Auckland with her husband Barry. They travelled extensively and came across the most gorgeous and picturesque scenery.

They created a large, airy studio in which to paint, and she started with the easiest medium – acrylic – on paper, board, and canvas. Nan has always studied Geography; this has helped inform her landscape artworks over the years.
She was producing several new pieces each week and the first Gallery to accept her work was Gallery 16 in Auckland. From 1998 onwards many other galleries across New Zealand began exhibiting Nan’s artworks – from Whangarei in the north, to Wellington, Christchurch, and of course Auckland. She held solo exhibitions between 2000 and 2007. 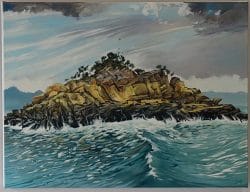 In this first decade Nan divided her time between painting landscapes and abstracts. This was at a time when buyers really appreciated abstract artwork. Nan also enjoyed the constraints and freedoms each art style afforded, especially the spontaneity abstraction allowed.
In 2005 she taught herself oils, Nan loved this different medium. She would under-paint in acrylic and over-paint in oils.
Around this time the grandchildren had started arriving, so Nan and Barry decided to move back to Queensland.

Nan’s second decade of painting was vastly different from her first. She was a relative unknown in her home state, the galleries were in economic turmoil with many closing, and others not offering opportunities for artists who were not already known to them. This was discouraging, however Nan and Barry did not give up. Instead, they decided to establish their own studio gallery in Margate, Gallery 22 opened in 2008.

Nan’s focus also shifted to art competitions rather than the financial outcomes. For instance, in 2010 she entered and was selected in, 10 art awards. She received several prizes for her efforts.

As commercial galleries were not displaying her work Nan decided to stop painting abstracts and became a contemporary representational landscapist.

Nan’s most recent foray has been into smaller ink drawings with wash on paper. She believes she has come full circle as drawing is where she started and was inspired all those years ago as a child!

Whilst living at BallyCara Nan has run an art group from 2014 until 2018, and still loves to paint in her garage studio, and draw in her study. Nan held a retrospective art showing and sale in November though expects from now on to be making smaller works which are easier to handle.

If you would like to view her larger paintings online visit Bluethumb at www.bluethumb.com.au and search ‘Nan Dingle’.